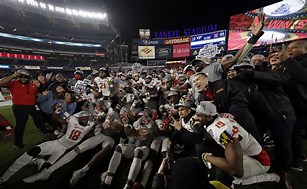 Tarheeb Still opened the scoring with a school-record long punt return of 92 yards. That was followed by a 70-yard touchdown pass – the longest in Maryland's bowl history – from Taulia Tagovailoa to Darryl Jones opening a 14-3 lead for the Terps (7-6 overall) and they rolled from there.

Tagovailoa had 307 yards of total offense - as Maryland totaled 481 yards on offense – on his way to earning the game's Most Valuable Player. He was 20-of-24 for 265 passing yards with two touchdowns, including 14-15 for 192 yards and a touchdown in the first half. He also ran four times for 42 yards. Tagovailoa tied the Maryland program record for touchdown passes in a single-season with 26.

The 44-point margin of victory is the third-largest margin of victory in Big Ten history, second only to Michigan's 49-point wins in the 1902 and 1948 Rose Bowl, against Stanford and USC, respectively. This victory definitely gives the Terps confidence and inspiration to continue to build going into next season.