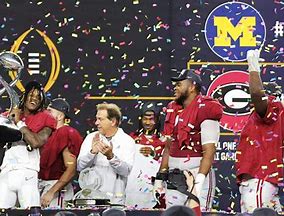 No. 1 Alabama rolled through No. 4 Cincinnati 27-6 behind a monster day from running back Brian Robinson Jr. The redshirt senior rushed for an Alabama bowl record 204 yards on 26 carries to deliver the Crimson Tide a 2021 Cotton Bowl semifinal win and their sixth appearance in the College Football Playoff National Championship.

Heisman Trophy-winning quarterback Bryce Young threw for just 181 yards against Cincinnati's elite pass defense, but he tossed three touchdown passes to as many different receivers. Young broke Alabama Passing records for both single-season yards passing and passing touchdowns in his first game since winning the Heisman.

Cincinnati managed to compile just 72 yards in the first half, the fewest in any half in College Football Playoff history. Cincy played better in the second half to end the game with 218 total yards, but it still averaged just 3.8 yards per play. Quarterback Desmond Ridder struggled mightily, completing just 17-of-32 passes for 144 yards. Running back Jerome Ford had 77 yards but only got 15 attempts in the game.

Cincinnati definitely doesn't need to hang their heads after a great season that fell short in the Cotton Bowl Playoff game. Cincinnati was first of the Non-Power 5 Conference to make the CFB Playoffs.

Alabama's win sets up a SEC rematch with Georgia. Alabama was a rare underdog in the SEC title. And considered slight underdogs (+2.5) vs. the Bulldogs in the CFP National Championship, but that is hardly an indicator of this team's potential to win yet another national title.