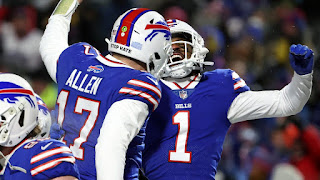 Josh Allen and the Buffalo Bills erased any doubt of who now rules the AFC East.

Allen set a team playoff record with five touchdown passes, including two to Dawson
Knox, and Devin Singletary ran for two scores in the first half of a 47-17 throttling of the division rival New England Patriots in a wild-card playoff game Saturday night.

Allen finished 21 of 25 for 308 yards in a game the Bills scored a touchdown on each of their seven possessions.

The Bills beat the Patriots for a second time in three weeks and rebounded from an embarrassing 14-10 loss at home on Dec. 6 in which the Patriots attempted just three passes while finishing with 222 yards rushing to counter the blustery conditions. The weather conditions Saturday was no walk in the park. The winds were relatively calm, the Bills were hot in frigid conditions with a game-time temperature of 7 degrees.

The margin of defeat was the largest in the playoffs for the Patriots in coach Bill Belichick’s tenure, which began in 2000.