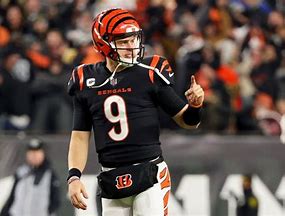 Things are changing for the Bengals.

The Bengals, whose last playoff win before this season came in January of 1991, won their second playoff game in eight days and are moving on to the AFC championship game with a 19-16 win over the Tennessee Titans, the No. 1 seed in the AFC. Bengal's linebacker Logan Wilson got a deflected interception with 20 seconds left near midfield. It w
as Ryan Tannehill's third interception of the game, and it was crushing. That set up a game-winning field goal as time expired.

There were multiple times on Saturday in which it seemed the Titans would storm back from a 10-point deficit and crush the Bengals' dreams. But the defense made some huge plays. And Burrow, who tied an NFL record by being sacked nine times by the Titans defense, brought it home. He hit a huge 19-yard pass to Ja'Marr Chase to put the Bengals into field-goal range. Rookie Evan McPherson then hit the field goal to put the Bengals into the NFL's final four.