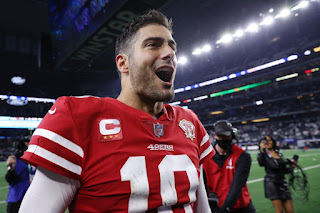 The Cowboys tied an NFL playoff record with 14 penalties in their Sunday night loss to the underdog 49ers, and San Francisco tried its hardest to give the game right back to Dallas, thanks in large part to late-game errors by quarterback Jimmy Garoppolo. But nothing encapsulated the sloppiness of the wild-card showdown quite like the game's final play, which saw the Cowboys literally run out of time on a comeback attempt that ended at the 49ers' 25-yard line.

he San Francisco 49ers are off to Lambeau Field to face the No. 1-seeded Green Bay Packers in the NFL divisional playoff round.

The 49ers, who made it into the playoffs by virtue of an overtime win at the Los Angeles Rams a week ago, survived Sunday despite nearly blowing a 16-point, fourth-quarter lead.

Quarterback Jimmy Garoppolo, who also had a bad overthrow of an open Brandon Aiyuk in the third quarter, finished 16-of-25 for 172 yards.

The Cowboys had a final chance with 32 seconds remaining and were at the San Francisco 41 with 14 seconds to go when Prescott took off up the middle intending to slide and then spike the ball for a final play.

But Dallas didn't get the snap off from the 24 until after the clock hit 0:00. After a brief delay, referee Alex Kemp announced the game was over.