Georgia Knocks Out Michigan in the Orange Bowl 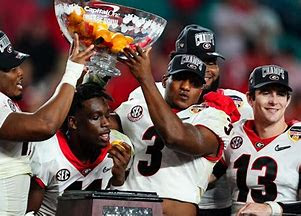 It was quite a bounce-back performance for the Bulldogs. They overwhelmed Michigan, which was playing in the CFP for the first time and enjoying a renaissance under coach Jim Harbaugh. Georgia scored on each of its first five possessions and never punted (the clock ran out on its final drive) in building a 27-3 lead at the half. The Bulldogs are the first team to score on their first five possessions of a CFP game.

Bennett, a former walk-on, played one of the best games of his college career, completing 20 of 30 passes for 313 yards with three touchdowns.

Meanwhile, Michigan, which had scored 143 points in its previous three games, couldn't muster much of anything against a Georgia defense that was surprisingly vulnerable against the Crimson Tide in its last game. The Wolverines turned the ball over three times, surrendered four sacks and went 1-for-3 in the red zone.

It was a disappointing end for the Wolverines, who won their first Big Ten title in 17 years to reach the CFP. They had won their previous five games, including a 42-27 rout of rival Ohio State and a 42-3 defeat of Iowa in the Big Ten championship game. Everything that had worked the past two months was no match for Georgia's speed.

After guiding his team to a 34-11 victory against No. 2 Michigan in a College Football Playoff semifinal at the Capital One Orange Bowl on Friday night, Georgia coach Kirby Smart wasn't interested in getting a celebratory Gatorade shower from his players. Smart wants to celebrate after a National Championship Win.

The task ahead is a monumental one: The victory gives No. 3 Georgia another chance to beat No. 1 Alabama and end a 41-year drought without a national championship.

Less than a month after the Bulldogs fell for the first time this season, to the Crimson Tide 41-24 in the SEC championship game, they secured a rematch by dismantling the Wolverines at Hard Rock Stadium.

Georgia will play Alabama in the CFP National Championship presented by AT&T on Jan. 10 (8 p.m. ET, ESPN and ESPN App) in Indianapolis. The Bulldogs will try to end a seven-game losing streak to the Crimson Tide.